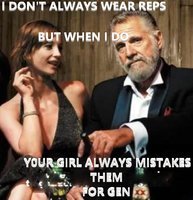 3 THINGS YOU HAVE TO CHANGE ON ANY REP...FOR REFERENCE